Meet the speakers of the Conference “Geopolitics of arms: tools and denunciation from civil society” 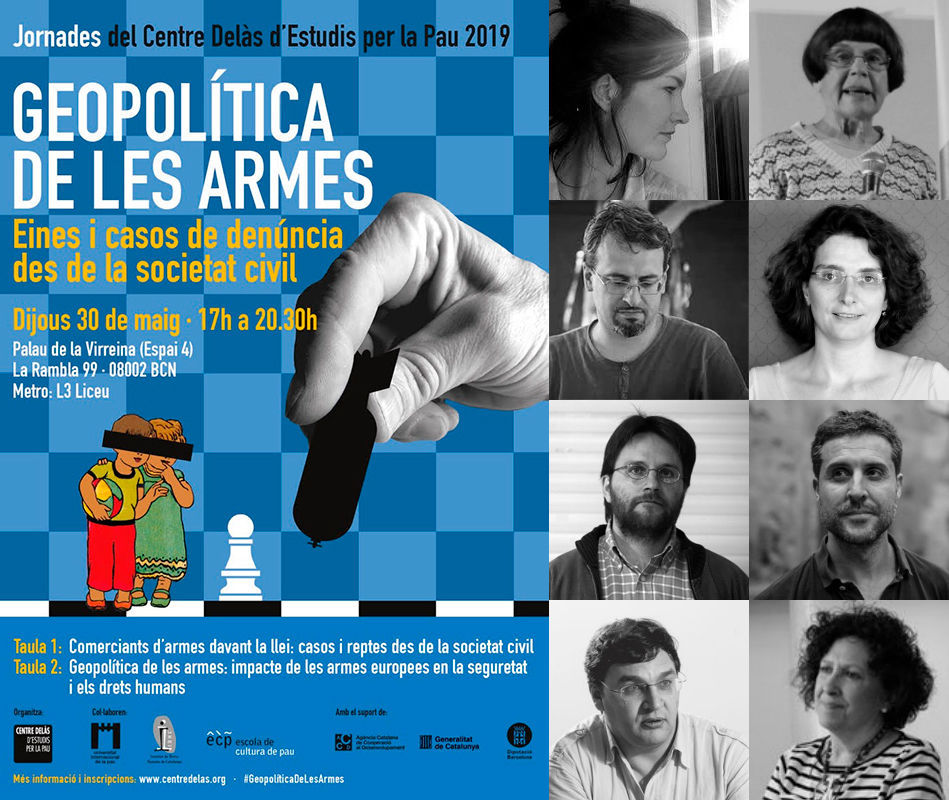 The Delàs Centre of Studies for Peace, with the colaboration of Universitat Internacional de la Pau, Institut de Drets Humans de Catalunya (IDHC) and Escola de Cultura de Pau, and the support of Diputació de Barcelona, organizes the Conference “Geopolitics of arms: tools and denunciation from civil society”, that will take place on the afternoon of Thursday May 30th, 2019 in Barcelona.

In 2015 she was awarded a Human Rights Fellowship (NYU) that enabled her to train with ECCHR (European Center for Constitutional and Human Rights), where she attended the International Crime and Accountability Program. Later, he worked as a human rights officer for the European Rule of Law Mission in Kosovo, EULEX. In 2016, he joined ECCHR’s “Business and Human Rights” program.

Member of the Law School since 1997. As a constitutionalist and specialist in administrative law, he advocates mainly before the Constitutional Court and the Council of State. He is also a professor at the Université Libre de Bruxelles, where he teaches fundamental rights and civil liberties. He was an advisor in the office of the Minister of Justice in 2004-2005. He is a regular lawyer for the Human Rights League in the context of arms trade litigation.

Member of the Campaign Against Arms Trade (CAAT). Her main responsibilities include ensuring that CAAT’s parliamentary work is integrated with the organisation’s overall strategic plan and liaising with other organisations in the UK and abroad.

National coordinator of the organization Rete Italiana per il Disarmo. He has been working in the field of peace and disarmament since 2004. He has research and coordination functions in mobilizations and campaigns promoting these issues, including the italian branch of Control Arms, Stop Killer Robots, International Campaign against Nuclear Weapons, Global Campaign on Military Spending and the European Forum on Armed Drones.

Doctor and professor of Administrative Law at the Universidad Autónoma de Madrid. His field of research is the application of Spanish legislation to military operations abroad and the arms trade in Africa.

Graduated in English Philology, has been working for 25 years on issues of human rights and control of the arms trade in Spain, Europe and internationally, mainly with Amnesty International. He coordinated AI’s advocacy work during the Arms Trade Treaty (ATT) negotiations. He also coordinated a UN-funded training programme on the ATT for the Belgian NGO International Peace Information Service. For several years he has coordinated a joint campaign on the control of the spanish arms trade by the NGOs FundiPau, Amnesty, Greenpeace and Oxfam Intermón. He has published several research reports on Spanish arms transfers.

Laëtitia Sedou works as an EU Programme Officer on behalf of the European Network Against the Arms Trade (ENAAT) and the NOEUMoney4arms campaign. She is a disarmament advocate with experience in Brussels and the European Parliament, including eight years in the World Organisation Against Torture (OMCT).

Tica Font has been a teacher in non-formal education, tutor at the Universitat Nacional a Distancia (UNED) and a technician in the environment at the Diputació de Barcelona. She was founder of the Centre d’Estudis per la Pau J.M. Delàs. She is an expert in defence economics, arms trade, defence budgets and military industry.

Doctor in peace, conflicts and development, economist and researcher on peace culture, disarmament and defence economics. He has worked as coordinator of humanitarian projects. He is coordinator of the Centre Delàs d’Estudis per la Pau and professor of international relations, armed conflicts, defence economics and cooperation (UJI, URL, UOC). And Vice President of the International Peace Bureau (IPB).

Check out the full programme and register here.

Check out the full programme and register here.