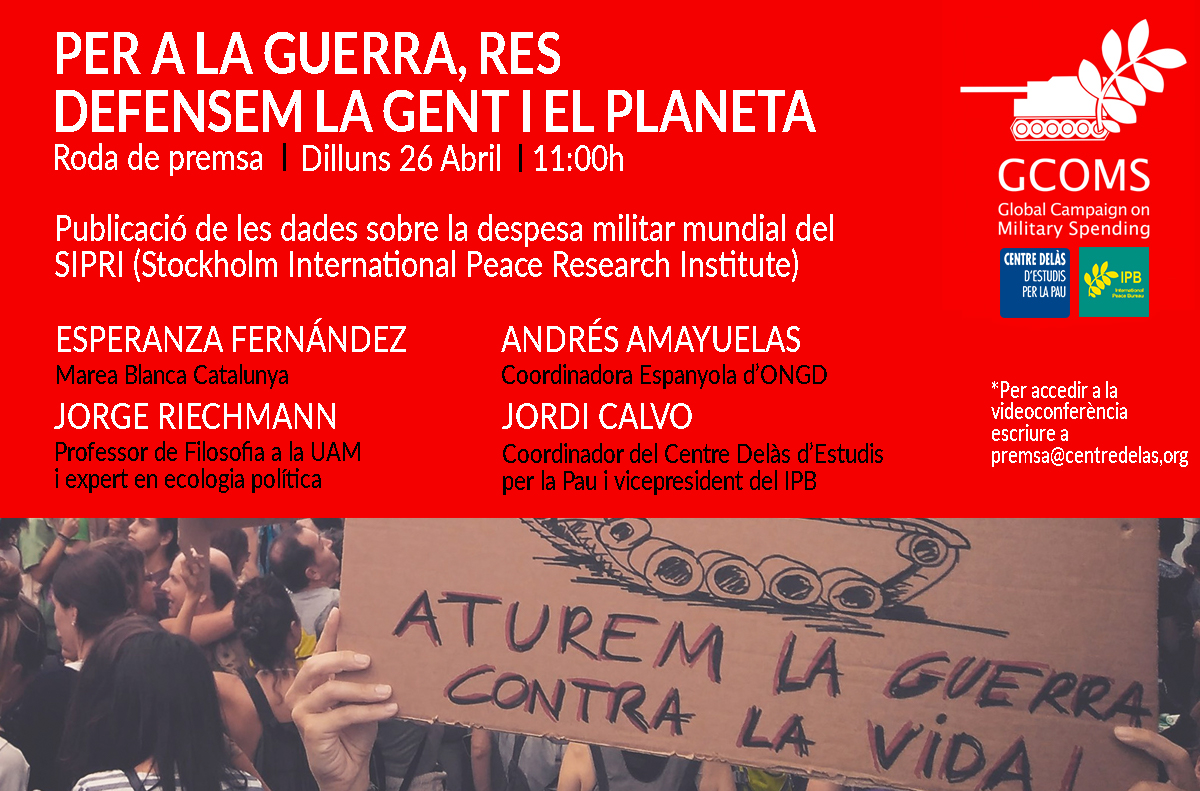 On Monday 26 of April, the Stockholm International Peace Research Institute (SIPRI) will publish the new figures for global military spending in 2020, which show a growing trend for the seventh consecutive year, surpassing the more than 1.92 trillion dollars revealed by the 2019 data. In order to critically present the new data and the growing global militarisation, we convened a press conference on Monday 26 April at 11:00 am via videoconference led from Barcelona, which will focus on the case of Spain. This conference will be held in the context of the Global Days of Action on Military Spending (GDAMS) of the International Peace Bureau (you may contact premsa@centredelas.org to receive access credentials).

The International Peace Bureau and organisations that support the Global Campaign on Military Spending (GCOMS) are calling on governments around the world to reduce military spending to address the health and eco-social crises. The campaign will make this demand known to the Spanish government, which in the General State Budget for 2021, consolidates a budget for the Ministry of Defence of 10,863 million euros. And if we take into account the funds distributed or hidden in other ministries, this figure reaches 21,623 million – an increase of 10.3% over the previous year – and once again sets a new all-time record in the midst of the crisis caused by the pandemic.

Another record-breaking figure for military spending will be made public on Monday when, after two years of talks, the European Parliament holds the final debate on the creation of the European Defence Fund (EDF), which will allocate €8 billion to the military and security industry over the period 2021-2027. This figure is in addition to the already growing defence budgets of each member state.

In order to offer an assessment of these issues, we will have the voices of renowned activists and analysts in the fields of peace and social justice, such as Jordi Calvo (Coordinator of the Centre Delàs and Vice-President of the International Peace Bureau), Jorge Riechmann (Professor of Philosophy at the UAM, expert in political ecology), Andrés Amayuelas (ONGD Coordinator) and Esperanza Fernández (Marea Blanca Cataluña).

This press conference will be one of five (Seoul, Barcelona, Berlin, Rome and Bogota), in connection with the Global Days of Action on Military Spending, GDAMS, which have been coordinating actions around the world since the 10th of April until the 17th of May. This campaign of the International Peace Bureau works to raise awareness and to promote action on the need to reduce military spending and redirect it to meet human and environmental needs.

The press conference will be held in Spanish.