Roundtable and seminar “Violence at the door of Europe. Militarization, walls and the European borders trade” 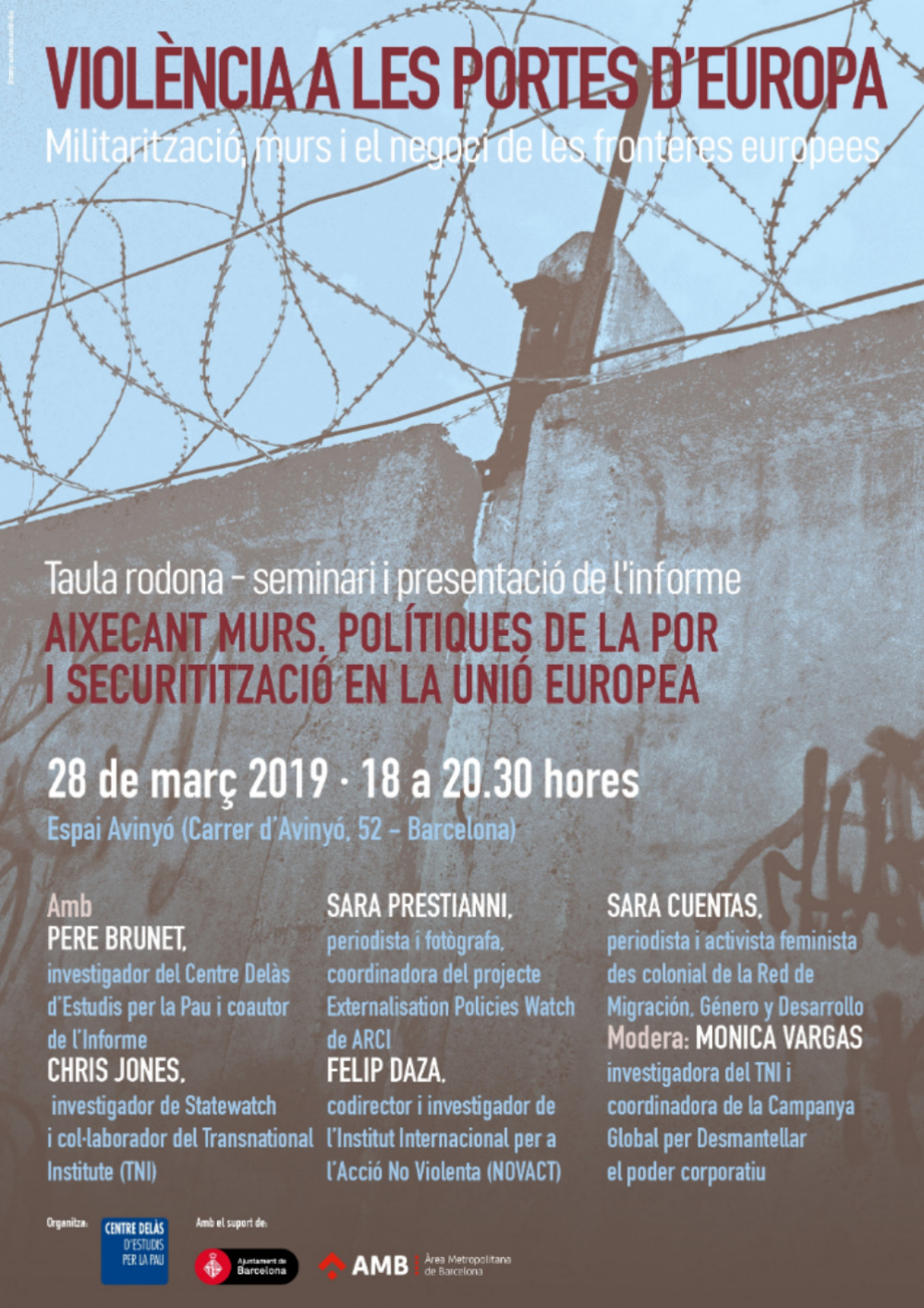 Public presentation of the report “Building walls. Policies of fear and securitization in the European Union”.

Next Thursday March 28, the roundtable and seminar “Violence at the door of Europe. Militarization, walls and the European borders trade” will take place and be an opportunity to present the report of the Delàs Centre for Peace Studies “Building walls. Policies of fear and securitization in the European Union”. This event will be followed by a debate that will approach different aspects surrounding the construction of Fortress Europe, what the European security and security strategy is like as well as the borders militarization trade, the violence trade and the migrants and refugees rights violation at the door of Europe.

The debate will involve Chris Jones, researcher from Statewatch and collaborator at the Transnational Institute (TNI); Sarah Prestianni, journalist and coordinator photographer of the Externalization Policies Watch project of the ARCI; Felipe Daza, co-director and researcher from the International Institute for Nonviolent Action (NOVACT); Pere Brunet, researcher from the Delàs Center and co-author of the report; Sara Cuentas, journalist and decolonial feminist activist from the Network of Migration, Gender and Development; and Nebon Babou Bassono, from Emergencia Frontera Sur. The roundtable will be directed by the researcher from the TNI and coordinator of the Global Campaign to Dismantle the Corporate Power, Mónica Vargas.

Researcher from the Statewatch group, with which he has collaborated since 2010, and he’s specialized in migration, police action and military and security affairs in the United Kingdom and the EU.

Specialist in international immigration policies. Her work of photographic and political research has focused since 2003 on the Mediterranean region, with missions to the internal and external borders of this area, from Libya to Greece, from the Canary Islands to Morocco, Mali, Turkey, Lampedusa. Now she collaborates with the ARCI immigration office and with international networks to defend the rights of migrants.

Degree in Political Science from the Pompeu Fabra University, Master’s Degree in International Relations from the CIDOB Foundation and Postgraduate Diploma in Conflict Prevention, Crisis Management and Post-Conflict Rehabilitation from the Complutense University of Madrid. Currently, he coordinates Novact’s non-violent and peace actions in Iraq, Lebanon, Jordan, Syria and Yemen, as well as efforts to increase control of the arms trade and private security companies.

Doctor and retired professor from the Polytechnic University of Catalonia. Scientific disseminator, interest in the study of the social implications of science and engineering and in the analysis of militarism and terrorism from a perspective inspired by scientific bases, and in the applications of science in the field of peace. Researcher at Delàs Centre of Studies for Peace, he is one of the authors of the report “Building walls. Policies of fear and securitization in the European Union”.

Journalist, researcher from the decolonial feminist analysis. Expert in gender, intersectionality and human rights. Her professional experience has developed in public organizations in Latin America as an expert in gender, promoting training processes, capacity building and advising on political strategies and analytical positioning.– Nebon Babou Bassono   Representative of Emergencia Frontera Sur and President of the Asociación Burkineses de Barcelona.

Researcher from the Corporate Power Project, which is part of TNI’s Economic Justice Program, she has been facilitating the Global Campaign to Regain the Sovereignty of Peoples, Dismantle Corporate Power and Stop Impunity since 2015. Her research has focused on the last 10 years in areas such as the impacts of the European transnational company in Latin America and the link with the Trade and Investment Regime.