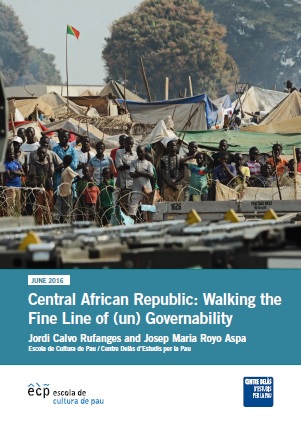 This unique report analyzes the current situation in the Central African Republic (CAR) in which the key internal and external characters, are determinant in the continued political instability that feeds military coups, dictatorships and fosters the uprising discomfort among the civil society. The causes of the causes of the confrontation of political elites are studied, such as the marginalization of a large sector of the country’s population and the growing inequality among genders. It is noteworthy that the crisis and disintegration suffered by CAR has elements linked to ethnic confrontations, fragmentation of the armed groups perpetuators of violence and the exploitation of religion. The report gives visibility to the role of the European Union in the militarization of the region through the export of defense materials as of small and light weapons. The case of arms exports from Spain to the CAR and the relative Spanish companies profiting from the instability of the company are fully contemplated in this work.

You can download the report here in Spanish, Catalan and English