Meet the speakers at the Conference “Another security is possible and urgent. New scenarios to build peace from the margins: the role of cities and civil society” 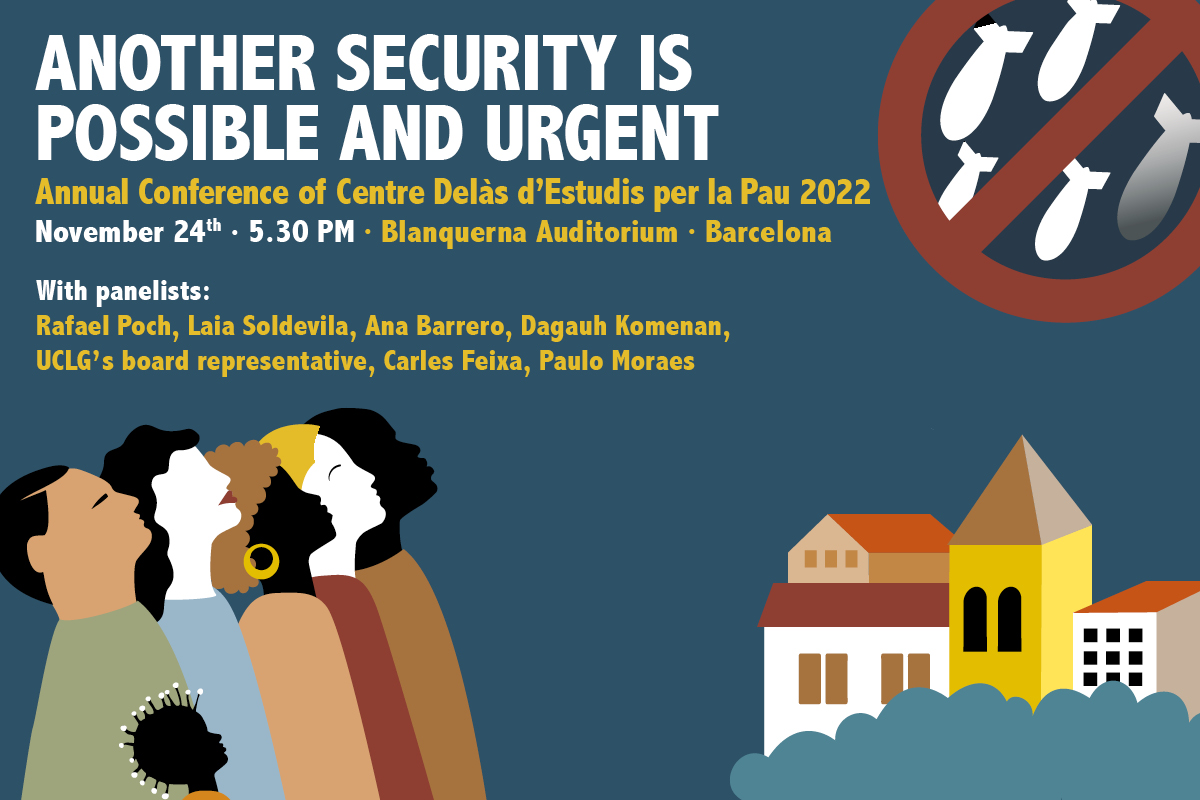 On November 24, the Centre Delàs for Peace Studies celebrates its annual Conference that this year will address “Another possible and urgent security. New scenarios to build peace from its margins: the role of cities and civil society“. The Blanquerna Auditorium in Barcelona will host this meeting from 5:30 to 9:00 p.m., which is organized jointly with the Institute of Institut de Drets Humans de Catalunya and the International Peace Bureau.

We invite you to read the profiles of the experts who will participate in the different tables of the Conference:

He was the international correspondent for La Vanguardia for 35 years, most of those years for the URSS/Russia (1988-2002) and China (2002-2008). He was also a correspondent in Berlin, before and after the fall of the Wall, and in Paris. During the seventies and eighties, he studied contemporary history in Barcelona and Western Berlin. He was the correspondent in Spain for Die Tageszeitung, editor for the German press agency DPA in Hamburg and an itinerant correspondent in Eastern Europe (1983-1987). Author of various books; about the end of the URSS (translated to Russian, Chinese, and Portuguese), about Putin’s Russia, China, and a small collective literary essay about the Germany of the euro crisis (translated to Italian). Currently, he works as a professor of international relations at UNED and is a farmer.

President of the Spanish Association of Investigation for Peace (AIPAZ). Director of the Board of Directors and manager of the project for the Culture and Peace Foundation. Member of the Board of the Institute for Human Rights, Democracy, Culture of Peace, and Nonviolence (DEMOSPAZ-UAM). Member, in representation of AIPAZ, of the Board of Sustainable Development and the 2030 Agenda in Spain, attached to the Ministry of Social Rights and 2030 Agenda. Member of the Grupo Motor of the Sustainable Development objectives Observatory of the platform Futuro en Común.

Carles Feixa is a lecturer in social anthropology at the University Pompeu Fabra (Barcelona). He is a doctor at the University of Barcelona and an honorary professor at the University of Manizales in Colombia. Specialised in the study of youth cultures, he carried out investigations about this topic in Catalonia, Mexico, and Colombia. Among the books he has written, we can highlight: De jovenes, bandas y tribus (1998), Global Youth? (2006), Youth, Space and Time (2016), La imaginación autobiográfica (2018) and El Rey. Diario de un Latin King (2020). He is a member of the Investigation Group Consolidated in Youth, Society, and Communication (JOVIS.com), and scientific director of the chair RE-GENERATION. He is currently the principal investigator of the project TRANSGANG, financed by the European Research Council.

Mayor of the city of Palmira, located in the southwest of Colombia in the department of Valle del Cauca, it is the 20th largest municipality in the country with 354,285 inhabitants and has the second highest homicide rate nationwide after Cali, its geographic neighbor. Mayor Escobar is an economist from Universidad Icesi and has a master’s degree in Public Policy from Universidad de los Andes. With 61,486 votes, he became the youngest mayor of his hometown, championing modernity, infrastructure, and violence prevention through socioeconomic opportunities for youth. In fact, Palmira is the winning city of the UCLG Peace Prize in its 2022 version, thanks to its violence prevention and reduction strategy PAZOS, Paz y Oportunidades.

Soldevila is a journalist, cooperative, and one of the editors of CRÍTIC. She cooperates as an analyst at ‘Els Matins’ on TV3. She is an associate lecturer at the Open University of Catalonia and a member of the Journalists Group Ramon Barnils.

Check out the full programme here